As part of our 'Original Content Series', we are delighted to publish a historical piece by David Semple. Here is a sneak preview. For the full article, and many other exclusive articles, click on our 'Viewpoint' tab.

"77 years ago, in August 1941, UK Prime Minister Winston Churchill met US President Franklin Roosevelt on board HMS Prince of Wales, off the coast of Newfoundland at Placentia Bay. The war was not going well for Britain and the Soviet Union was fighting for its life against a massive German invasion which had begun in June.  The United States was still neutral but had been selling arms to Britain for two years, finally signing the Lead-Lease arrangement in March 1941 for the financing of Britain’s war against Nazi Germany and Italy. Winston Churchill was determined to drag the United States into the war and set out for Placentia Bay on August 4, 1941 to meet President Roosevelt for the first time.

Although the United States was unable to enter the war in the summer of 1941, Roosevelt and Churchill signed a document which went on to be called the Atlantic Charter. This became the most important declaration of Western principles in the 20th century, principles which still shape our world in the 21st century. The post-war world we live in today was born during that week in Placentia Bay, off the coast of Newfoundland, the island which was both the foundation stone of the English-speaking New World, and the island where the British Empire began its life..." 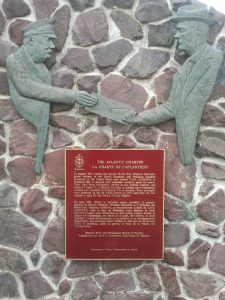